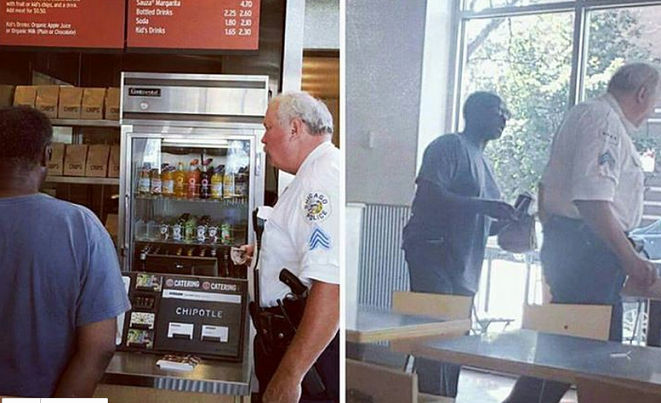 The Chicago Police Department praised Sergeant B. Hagarty for his act of kindness. It’s really an effortless act, but heartwarming.

According to a Facebook post the officer was sitting by himself in a Chipotle restaurant. He saw a man rummaging through the trash looking for food. Sergeant Hagarty knocked on the window motioning to see if the man was hungry. The man said yes. Hagarty then bought a meal for the man.

“So today I saw something that made my day. This Chicago Police officer was sitting at a window seat at Chipotle, outside the window he saw a homeless man digging through the trash. The cop knocked on the window, getting the homeless man’s attention. Through the glass he asked the man if he was hungry. The man nodded yes, and the cop motioned for him to come inside. The cop told him to set what belongings he had next to him and told him to order

what he wanted because he would pay for it. They stood in line together and at the end the cop paid for the man’s meal. A simple hand shake was exchanged between them and they parted ways like it was no big deal. Touched my heart so much, with all the (crap) police are getting these days it reminds me there’s so much more good out there than anyone ever wants to give credit. If everyone did something simple like this every day the world would be a better place.”

Patriot’s Fan Happy with an Act of Kindness

Grandmother Appreciates Kindness of Officer Who Gave her a Ticket