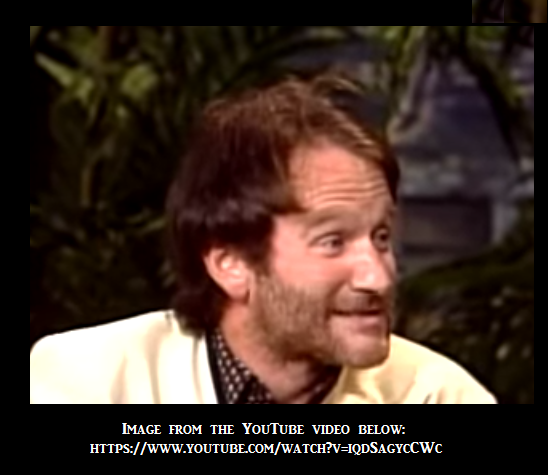 Last week, a friend of mine and I were commenting on the wide range of talents that Robin Williams had. We all know he was funny when we met him on the TV show Mork and Mindy. He then appeared in the movie Good Morning Vietnam … and was taking off!  In 1996 the movie Jack came along where his disorder aged him four times faster than the other kids. In Good Will Hunting, we saw another side of Robin Williams. Then came Patch Adams – he was funny again.  Mrs Doubtfire – showed more range. And remember the movie Nine Months with Hugh Grant? Lesser known, but surely funny:

I loved his bits on Johnny Carson where he shows his improv skills. Two of my favorite people:

When you listen to the television reporters discuss Robin Williams, you will notice this thread of kindness. In Robin there was a general theme of care for other people. On CNN and other stations you hear that Williams was nice to everyone – other actors, reporters who interviewed him, cameramen and everyone around. You felt that he wanted to see people at ease.

He is said to be one of the kindest men in the room. That could be where his ‘drive’ for his humor comes from – wanting to please people, wanting to entertain. And he did that. Then comes addiction. It begins with having a beer and spending time at parties. I know that from experience. It’s fun. Add Robin Williams and it’s more fun! He spent plenty of time stretching it to the limits at parties. But that turned into a battle with that addiction. We all want to feel good…

If women ran the world we wouldn’t have wars, just intense negotiations every 28 days. – Robin Williams

And, I feel that kind people have an inner hurt. It’s an empathy and even a rapport for the feelings of other people. We (I know this from experience) can hang onto this pain so we remember to treat other people well. We even create the pain within ourselves to continue that rapport. The inner hurt is a real pain within. Sometimes a person looks to drugs and alcohol to ease the pain.

He’s kind to everyone outside of himself and he smiles. But inside he hurts. Sometimes it’s offers creativity to always, always find new way to be kind to others – making them laugh, making them smile, feel empowered or feel at ease. But there is always a deep power to please people. That is a continual inner resource.

We had gay burglars the other night. They broke in and rearranged the furniture.

So, Robin was not a celebrity who didn’t give. He gave in a big way. And it was all consistent with the way he felt. It seemed to be that we are all one. We are equal. No one is beneath me. Robin Williams was one of the most giving stars.

You’re only given a little spark of madness. You mustn’t lose it.

According to looktothestars.org, Robin Williams gave to these charities:

Here’s another comment on Robin’s kindness and generosity of spirit from Conan O’Brien:

By the way, I can’t think of any person or people who is or was as well liked as Robin Williams. Can you? A true positive spirit:

Feeding Pizza to the Homeless

Wrestler Ben Jackson is Driven By Heart through Cerebral Palsy