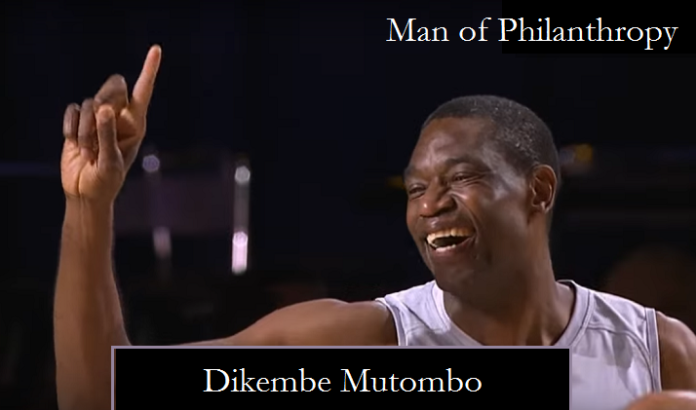 Just like any other professional sport, having a successful career in the NBA can be a very lucrative proposition. As with any successful career, often, success is accompanied by wealth and with the average NBA player making around $5 million per year after the 2013-14 season, money is abundant in players lives. Many popular and sometimes not as prominent players have used their riches as an opportunity to help others. This article will take a look at 5 of the most philanthropic NBA players in history.

Widely known for his is signature finger wag that he used to humiliate opponents after blocking their shots, a member of the Basketball Hall Fame, Dikembe Mutombo is one of the most philanthropic NBA Players in history. After a very successful career that labeled him as one of the best defensive players of all time by many, Dikembe spent his time away from the court in Humanitarian work by establishing the Dikembe Mutombo Foundation which centers around providing relief and aid to people in the Democratic Republic of Congo.

His charitable efforts not only earned him the NBA’s J. Walter Kennedy Citizenship Award twice in 2001 and 2009, but he has often been ranked as one of the most generous athletes in the entire world by many publications due to not only his efforts in Congo many other places that he has visited. After dedicating his life after basketball to the welfare of others, Dikembe Mutombo is the most Philanthropic NBA player of all time.

Beginning and ending his illustrious career with the Los Angeles Lakers where he won five championships, Earvin “Magic” Johnson has spent much his post-NBA life committed to Philanthropy. Magic began his philanthropic journey by founding the Magic Johnson Foundation in 1991. The organization’s primary purpose is to empower endangered communities and address epidemics like HIV/AIDS. Magic Johnson’s largest charitable contribution came after he had announced he was diagnosed with HIV in 1991.

The announcement came in a time where HIV was very taboo and was often viewed in a very negative light. Magic’s announcement led to more research regarding the disease and more importantly gave a lot of people living with HIV/AIDS hope that they could live a successful life despite being plagued with the disease. Overall, although Dikembe Mutombo may have more qualifications, Magic Johnson has a done a lot of philanthropic work across his life.

Born and raised in Akron, Ohio and often called one of the greatest basketball players of our generation, LeBron James has spent much of his career giving where it matters most. Listing all of James’s philanthropic achievements would be tough as he has supported many causes. However, some of The King’s achievements justify being mentioned over others. For instance, LeBron’s Foundation has presented 1,100 poor kids the opportunity to go to college free. The initiative which is part of James “I Promise” program will cost over $41.8 million and allow many kids to do what LeBron couldn’t as a child. Similarly, LeBron has also donated $2.5 million dollars to the Smithsonian National Museum of African American History and Culture for a Muhammad Ali exhibit. In conclusion, LeBron James has proven to support charitable causes time and time again, and if the past is any indication, he will likely continue to do so for much of his life, all while playing at the MVP level we expect from him on the court.

Currently the owner of the NBA’s Charlotte Hornets and best known for his legendary career with the Chicago Bulls, Michael Jordan has spent much of his involved life in philanthropic causes. Most of Jordan’s charitable work stems from his purchase of the Hornets in 2010, where he helped create the Charlotte Hornets Foundation which provided much-needed aid to needy causes over the years. Even though Jordan isn’t often associated with making a lot of charitable associations unlike some of this peers, he continues to donate to worthy causes as they present themselves. For instance, MJ gave $2 million to victims of police violence amid a rise in police shootings of innocent people last summer.

Now a member of the Golden State Warriors and formerly the face of the Oklahoma City Thunder, Kevin Durant has spent much of his career donating to numerous causes. After establishing the Kevin Durant Charity Foundation, Durant has led many fundraisers for worthy causes funneled by his organization. Other examples of Durant’s philanthropy include when he donated $57k to local homeless kids in Oklahoma City even after leaving the team. KD’s commitment to support various causes throughout his career earns him a mention when talking about the most philanthropic players of all time.

Brake Mechanic – from Homeless to Purpose

Love is Like a Butterfly Allow Your Energy to Flow